Roughly two weeks ago, I had dinner with a friend, somebody I have known for over 35 years, really ever since we were five years old.  After the dinner/meet-up, I started to write this piece, but tabled it until this afternoon/evening.  During the get together, we reflected on the current environment, the challenges of the past two years, and the opportunity today.

Since this gentleman knows me pretty well, I made an effort to be quiet, and listen more than usual, and what came out caught my attention.

His observation is that whenever I have felt the worst (and these past twenty one months have been at the top of my list for difficult stretches in an active 25 plus year investment career), the weight of sub-par returns, the weight of losses, that is when things usually turned.

This gentleman knows very little about the markets (other than our interactions over two plus decades investing, and longer than that as friends), and what he reads on his own accord.  He also knows very little about the investment business, though he is very smart in his own right.  Really, he is just a good lifetime friend of mine, through the ups and downs, and he has trusted me to manage his capital.

Thinking about this dinner today with my friend, and thinking about this past week, and the past several years, starting with the founding of “The Contrarian” in December of 2015, it seems we are on the cusp of a significant inflection point.  Looking back, 2016 was the start, and while I have talked about how that year was not easy, it ultimately turned out to be a very good year for investment returns if you were willing to think different.

Besides being a good investment year for our fledgling group, though very few members were on board from the start (as most left earlier in 2016), 2016 saw a secular bottom in commodities early in the year, and then a secular bottom in the bond market, specifically a longer-term sovereign yields, which occurred in the middle of 2016.

Interestingly, the second half of 2016 looked a lot like today’s investing environment, with longer-term yields rising, U.S. commodity equities outperforming, and ironically the U.S. Dollar rising, though interestingly today, the U.S. Dollar Index is much lower than its previous peak in 2016, or really where it was from 2015-2017.

The inability of the U.S. Dollar Index to make a higher high is a big positive, in my opinion, especially for commodities, commodity equities, and international equities, which have lagged U.S. returns badly over the last decade.

2017, and a majority of 2018 clouded and obscured the picture that was painted so beautifully in 2016, yet after a long detour, we appear to be back on the road.

How will the rest of the inflection point play out?

The specific details, I do not know exactly (though I have my general road-map).  This is similar to past major inflection points.  Looking back, a lot of things that happened in 1996-2002, or in 2006-2010 surprised me, though having the bigger picture road-map/game plan proved invaluable.  Ultimately, if you are right, and able to stick to it, having a bigger thesis can be very rewarding.

Reflecting on the past opportunities, another thing that stands out to be is resilience.  For some of my best years/returns in the market, things did not always work out as planned.  Sometimes I endured significant losses before the turning point, sometimes I had to commit additional capital, and sometimes I just made, and still do make, mistakes.

However, being resilient, and sticking to something with perseverance, when you think you have an edge can payoff with rewards that are hard to imagine, if you are positioned correctly, and aggressively, which of course has risks, and which of course is not easy.

So, what should we stick to today?  What is our primary investment thesis today?  This linked article will summarize it nicely.

A further simplification can be explained in few sentences.  Specifically, bonds topped first (2016, and I believe this is confirmed now with the very recent steepening of the yield curve), stocks will top next (there is a contingent of smart investors that I interact with that believe this has happened already on global basis, though I am not in that camp yet), and then commodities last.

Over the past several weeks, we are seeing this thesis play out in real time, as longer-term sovereign yields are rising, led by U.S. yields, yield curves are steepening, and commodities are outperforming, with oil up four straight weeks to new highs being the most notable example, however, there are many other examples, including natural gas, which might be the most crowded trade in the market I see today (almost every market participant believes U.S. natural gas prices will be lower for longer, ironically while world natural gas prices surge).

In summary, the runway for commodity, and commodity equity out-performance should still be long, as we have not seen a capital rotation yet, though the seeds for this capital rotation have been planted.  Lower for longer is currently being challenged as interest rates normalize across the curve, first in the United States (and first at the short-end of the curve, but now at the longer-end), and soon the rest of the world will follow, as Europe and Japan are already both reducing their quantitative easing.

Keep this thought in mind, and keep repeating it.  Bonds will top first, then stocks, then commodities.

With equity markets in the U.S. poised for some of their worst real returns in modern market history, the relative and absolute opportunities should be every bit as big as they were in 2007-2010 or in 1999-2002. 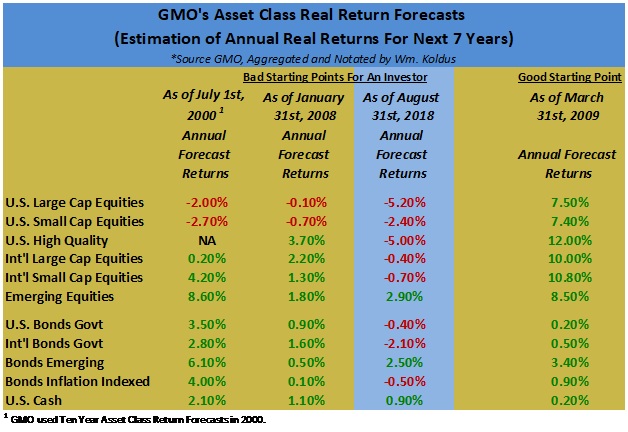 In closing, stay resilient, keep developing your ability to think about the next opportunity after a success, or more importantly after a mistake, and keep your minds focused on enormous relative and absolute opportunities, which as the chart below shows are in commodities versus the S&P 500 Index (SPY), with commodity equities representing an even better opportunity, in my opinion.

I have a number of things I am working on research wise, including a new Top-Ten List.  After the turning point in April through June, July and August were a cruel return to purgatory, the proverbial “Lucy” taking the ball away from “Charlie Brown” one last time (hopefully one last time) as he prepared to kick it, and frankly, I couldn’t publish a new Top-Ten List, as it was just an open wound.  As painful as it is, there is going to be a time where all the suffering is worth it, and I am increasingly confident that we are closer to that point today,