There is an old saying that a picture says a thousand words, so with that in mind, take a look at these two charts, the first from Ned Davis Research, and the second from Chuck Mikolajczak, by way of  Alastair Williamson. 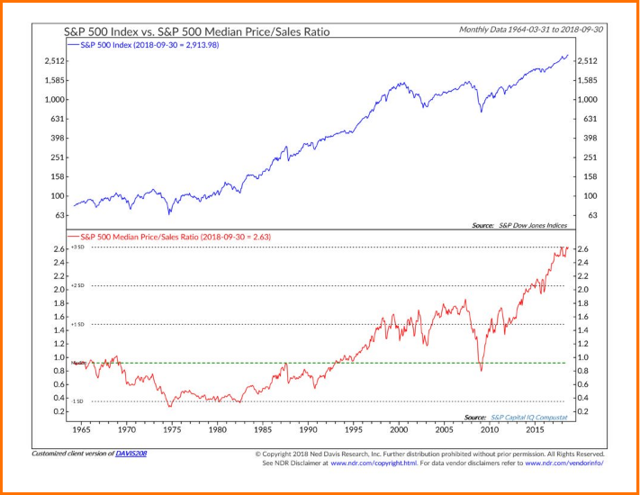 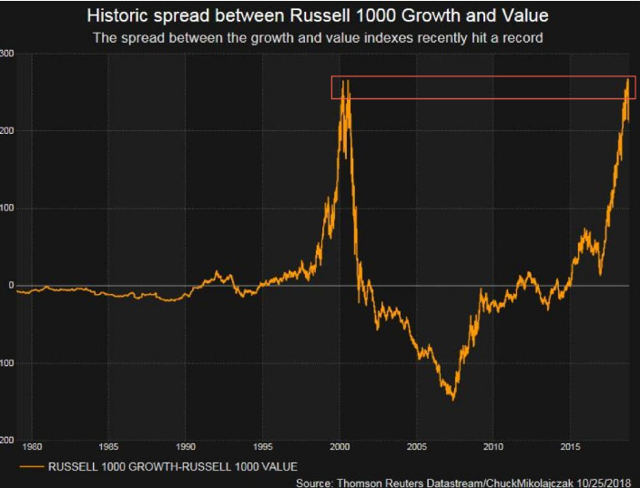 Looking at the charts, two conclusions should be abundantly clear.

1.  The U.S. equity market has been in a bubble, and this bubble has exceeded the epic 1999/early 2000 peak valuations in certain areas.

2.  Growth companies, led by the infamous quintet of Facebook (FB), Amazon (AMZN), Apple (AAPL), Netflix (NFLX), and Alphabet (GOOGL), and carried along by many others, including NVIDIA (NVDA), and more recently, before its even more recent decline, Advanced Micro Devices (AMD), have been in-favor to the extreme excesses of the late 1990’s, while value stocks have rarely been this out-of-favor historically, on a relative basis.

The price action in October was a wake-up call, with AMZN, perhaps the leading flag carrier for the markets broader price action the past decade, down -20.2%, and cast aside, forgotten companies like Southwestern Energy (SWN), which is one of my favorite buy-and-hold investments today for the  next decade, up 4.5% for the month, even with the S&P 500 Index (SPY), which is dominated by the large-cap technology growth stocks, down -6.9% for the month.

In an irony of ironies, Southwestern Energy was actually the worst performing S&P 500 Index component from the U.S. equity bull market starting point of March 9th, 2009, through its exclusion from the venerable index in 2017, due to its lower market capitalization, which was caused by its share price decline and severe under-performance.

I would bet almost anything, that Southwestern Energy, which has undergone a very dramatic transformation the past three years that we cover in depth in The Contrarian, outperforms the S&P 500 Index over the next decade.

There are whole studies that cover how unpopular companies outperform, particularly those booted from popular indices like the Dow Jones Industrial Average (DIA), and that is the place to look for opportunity today, in my opinion.

After all, there is a reason that Ibbotson data, now part of Morningstar (MORN), shows small-cap value as the best performing asset class in the market over the long-term.

Sure, this has not been the case for the past decade, but as we showed above, the U.S. equity market has been in a historic bubble, and value equities have been historically out-of-favor.

I am biased, of course, but I think we have the best group of investors and traders anywhere, seasoned by nearly three years of experience together, positive and negative, and commentary for some members, with many members actively contributing their unique perspectives to a robust Live Chat discussion on a daily basis, particularly when volatility surfaces.

From my perspective, as I said in my blog posts the past two weeks, it would be worth taking a look, simply to view the Live Chat dialogue.

I do recognize that the price point of The Contrarian is a little steep, coming in as one of the more expensive services in SA’s Marketplace.

To celebrate this official soft launch, which includes a deep-dive research report on what I believe is an extremely timely equity (delivered via email upon membership), I am offering a limited time $299 annual membershipfor the first 100 members. To get this discounted price, simply use the coupon code “first100”.  (WTK’s Note: There are a few slots left remaining at this introductory price).

Ultimately, I think we are now at a major inflection point in the financial markets, highlighted by the price action in October of 2018, which has been ongoing in slow motion for three years, but which could suddenly accelerate. Being different, being contrarian, has been extremely painful for a long time now, however, resilience and persistence, two necessary qualities for success in contrarian investing, in my opinion, are leading to what I believe is an upcoming golden age for active investors.

If you have any questions, send me a direct message at any time,

Disclosure: I am/we are long SWN and short SPY as a market hedge.